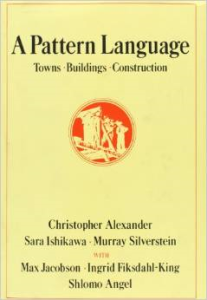 One of our most valued clients and a very talented energy efficient residential design firm, Sunlight Homes, introduced me to the architectural concepts of A Pattern Language, by Christopher Alexander.  This is perhaps standard text at architecture schools, but I would imagine most structural engineers would say, "A Pattern Who?".  A Pattern Language, or APL, is a book/manual/bible compiling timeless rules of architecture for buildings, homes, neighborhoods, and even towns.  The book was published in 1977, but truly transcends eras of pop culture.  As I read through it, I found myself having previously acknowledged many of these principles without formally recognizing them.  The book not only contains 253 of these rules, or patterns, but also how they relate to each other and the progression in which they should be implemented into a design.

This post is the first of a series highlighting the patterns that I believe should be most strongly considered when designing a home and are all too often absent in today's new construction housing market.  Some patterns are obvious, some are intriguing, and some I would have never thought of, but they all deserve consideration.

On no account place buildings in the places which are most beautiful. In fact, do the opposite. Consider the site and its buildings as a single living ecosystem. Leave those areas that are the most precious, beautiful and healthy as they are, and build new structures in those parts of the site which are least pleasant now.

View all posts by: Adam King